Growing Beyond Groceries: Understanding the Financial Power of The Ecosystem Expansion

Grocers are in a unique position to expand beyond their core retail offerings. It can be challenging to build an ecosystem—but the rewards could be worth it.

There are few locations more central to our lives than grocery stores. Whether we grab items daily or stock up weekly, we visit them so regularly that no other retail business has nearly as many consumer touch points or generates as much user data. And with their vast store networks, supply chains, and last-mile setups — along with the trusted relationships they have with consumers — grocery retailers have an enviable platform to build on to expand beyond their core business.

For many decades, grocers have been actively leveraging their store networks, frequent transactions, and brand strength to grow beyond food into areas including non-food retail (such as hypermarkets), pharmacy retail, financial services, and more. Yet today, the opportunity to grow beyond these core services is greater than ever. Through digitalization, expanding the grocery business into other domains has become much more scalable because the industry is no longer tied to physical stores.

The most ambitious version of leveraging this platform is to build an ecosystem. Digital-first retailers such as Amazon and Alibaba have led the way, building what many consider the most successful ecosystems in the world. Leading traditional grocers such as Walmart, Loblaws, and Ahold Delhaize have followed, moving in the ecosystem direction. Still, many grocery retailers have yet to take full advantage of today’s digital technology. These grocers could unlock opportunities for both additional revenue streams and higher valuations by thinking through whether their unique assets—their customers and traffic, brand, physical assets, and so on — can provide attractive growth opportunities beyond the core.

How leading grocers are building ecosystems
The pattern is clear: grocers venturing beyond grocery generate higher returns for shareholders. In fact, the world’s top eight retailers by revenue market share, five of which are grocers (Amazon, Costco, Kroger, Schwarz Group’s Lidl, and Walmart), all experimenting with such expansions.

Our analysis finds publicly traded grocers pursuing some form of ecosystem strategy have been rewarded with higher enterprise values (EV) relative to the broader grocery sector. We have identified about 15 grocers with some ecosystem activity that have an average EV to EBITDA multiple of 15.3, compared with an overall average multiple of 10.7 for the grocery companies in our data set. Even if some expansion activities may dilute earnings margins in the short term, they can still drive value for shareholders as a business is repositioned toward investors.

In essence, the value creation from ecosystem activities is delivered in three ways:

Consider the US-based grocer Walmart. It has a vast, integrated, compounding ecosystem intended to engage and deepen its share of wallet beyond retail for its 150 million weekly customers. Walmart provides healthcare services through a network of primary health clinics, offers in-store lab testing in partnership with Quest Diagnostics, and works with insurer Humana to sell Medicare drug plans.

In financial services, it provides prepaid cards in partnership with Green Dot, money transfer services through MoneyGram, and tax services through Jackson Hewitt. Its Walmart+ membership program includes benefits such as free shipping and cheaper prescriptions, while Walmart Marketplace competes with Amazon and is growing rapidly through its expanding network of third-party sellers.

Similarly, Netherlands-based Ahold Delhaize has built an ecosystem that includes different business models in food, such as food service through FreshDirect and partnerships in Europe, e-commerce full-basket delivery, and a variety of store formats, including supermarkets and convenience. Ahold Delhaize has also scaled its non-food marketplace, and is making steps in media monetization and personalization across its food and non-food propositions, leveraging its consumer data and insights. 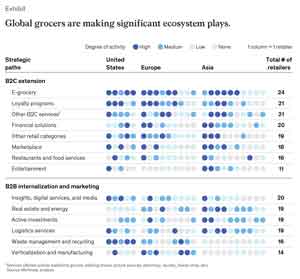 Two primary ways to grow: B2C and B2B
There are two major routes for ecosystem expansion: entering new business-to-consumer (B2C) verticals and touchpoints, or externalizing and monetizing internal capabilities and offering them as business- to-business (B2B) services (Amazon’s AWS arguably being the most famous example. And the ability to extend services into pharmacy and healthcare is dependent on national regulations.)

Broadening into B2C markets
When we examined the 24 largest global grocers to see the most prevalent B2C expansions, we found (unsurprisingly) that all of them had ventured into online grocery. In addition, the vast majority had built loyalty programs, expanded into retail categories beyond grocery, and offered financial services (exhibit).

Next on the list after these common (and fairly traditional) expansion verticals comes a rapidly growing expansion play: marketplaces.

In essence, marketplace platforms facilitate retail by allowing third-party sellers that own inventory to sell to consumers through the marketplace interface. This has proved to be a tremendously successful business model that has shaped some of the most valuable companies in the world, notably Amazon and Alibaba. The (not so) secret sauce behind the success of the marketplace model is anchored in the ability to offer an expansive range at the best prices without the associated inventory risk and capital requirements.

While early marketplace activity was driven by online-only players and non-food retailers, grocers are increasingly exploring the model. This enables retailers to broaden their food offerings (for example, with local or niche ethnic brands) and to quickly expand into more non-food offerings. For example, Kroger announced an expansion of its Kroger Ship program to add 50,000 items to its offerings, including natural and organic food, international food, specialty items, housewares and toys.

The move was intended to increase convenience to the customer and to offer an augmented one-stop-shop experience to compete against more diverse retail marketplaces such as Amazon and Walmart. The marketplace model carries risks, such as the difficulty of vetting product assortments and of providing a consistent customer experience. But the benefits of a well-developed marketplace can be immense in terms of better serving customers, expanding online traffic, and gaining additional data and insights on customers, as well as through the financial benefits from seller commissions and monetizable services to the seller community.

Deepening within B2B services
For B2B services, the most common areas of expansion were insights, digital services and media, real estate and energy, logistics, and active investments. One of the most extreme examples within grocery is Ocado. What started as an online grocery business in the United Kingdom evolved into a B2B technology business with customers such as Groupe Casino in France, ICA in Sweden, Kroger in the United States, and Sobeys in Canada.

The current blockbuster use case for expanding into B2B services is retail media networks. Grocery retailers have historically been good at monetizing their substantial exposure to consumers — either in-store or through leaflets and magazines — by selling space to consumer packaged-goods companies.

Retail media networks (RMNs) are the digital equivalent of this. When done well, they can unlock approximately 2 to 4 percent of online sales in positive EBIT contribution. Grocers are in a unique position to build RMNs: the high shopping frequency they enjoy provides ample advertising opportunities across assets such as websites, apps, and email; the vast amount of data enables accurate personalization; and the fact that advertisements appear when consumers are in a shopping mode enables very high — and, importantly, measurable — conversion. To capture this opportunity, grocers are increasingly developing in-house teams that engage directly with their brands on marketing opportunities and effectively operate as advertising agencies.

While North American grocers such as Walmart and Kroger were early adopters of this approach, we’re seeing European players such as Tesco and Sainsbury’s take meaningful steps into this area.

To date, it’s mainly large retailers with the technology requirements and new capabilities that are set to pursue the retail media network opportunity. But we expect that smaller and regional players will increasingly be able to use plug-and-play solutions and that third parties will provide the same services to vendors and monetize accordingly.

The keys to growing beyond retail
We see several grocery retailers expanding beyond the core and building ecosystems that generate additional value for stakeholders. But pursuing an ecosystem strategy does not necessarily lead to success; the reality is that many more companies have experimented with ecosystem strategies than have succeeded in using them to create substantial value.

Based on what we’ve learned from examples of both success and failure, the fundamentals for success are clear (and similar to other endeavours): ambitious senior leadership with willingness to pursue big bets and accept risk, a vision and strategy with rigorous prioritization, and an organizational model that fosters the right collaborations and agility. Once these fundamentals are in place, it comes down to execution. Key actions will then include the following:

The benefits of a well-developed marketplace can be immense in terms of better serving customers, expanding online traffic, and gaining additional data and insights on customers. The world’s largest grocery retailers are making moves, but that doesn’t mean midsize or regional grocers can’t develop ecosystems.

First, it’s not necessary to take a leading role. Grocers can partner with others that have the capital or capabilities to orchestrate a robust ecosystem approach while still reaping the benefits that come with stickier, more cost-effective customers.

Second, grocers can find a niche to own. Is there a segment of customers that can be uniquely served? For instance, regional and smaller banks target specific segments — such as newcomers to a country — with tailored services to meet their needs. Similarly, pet ownership and care have emerged as powerful niche ecosystems within the consumer-packaged-goods sector.

What we’re saying is that grocers don’t need to seek to replicate the Walmart playbook — there may be sizable, underserved groups to service and own.

How Will Soft Skills Give CFOs a Sharper Edge?

The Role of Finance Continues to Evolve

KPMG in Canada reports on its environmental, social and governance impacts